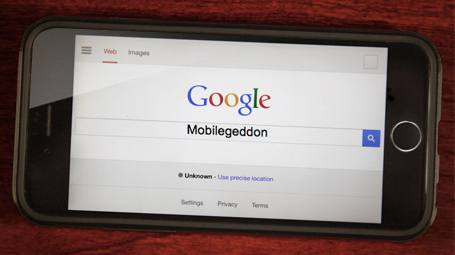 The need for businesses to ensure cross-device compatibility for their online presence was recently given a new urgency. On March 16, Google announced on their Webmaster Central Blog, the rollout of a second mobile-related update to the search engine’s algorithm, which is prepared to continue a process set in motion by April 2015’s Mobilegeddon.

The apocalyptic sounding Mobilegeddon sent a very strong message about Google’s vision of the future of online search by emphasizing mobile compatibility as a ranking signal and by penalizing non-compliant sites. Despite initial predictions that it would have minimal effect, the March 2015 update ultimately did have a significant impact on search results with various reports released indicating that between 40% to 50% of non-compatible sites were directly impacted and noticeably lost rank.

This latest update is a continuation of an ongoing process and should be taken seriously.

The reason Google gives for its ongoing commitment to the democratization of wired devices is simple, and stated in the first sentence of the announcement, “Getting good, relevant answers when you search shouldn’t depend on what device you’re using.”

Some businesses with older, non-compliant websites may see this as Google forcing them to update and in some respects this is true. But, it’s worth pointing out that the volume of mobile searches surpassed desktop searches in 2014, and in 2015, for the first time, the number of mobile-only Internet users surpassed the number of desktop-only users. Online search is definitely trending towards mobile, so to successfully employ any online marketing it needs to be part of the equation.

The announcement makes a point of assuring us that the mobile requirement is not the entirety of the search equation and that “the intent of the search query is still a very strong signal — so even if a page with high quality content is not mobile-friendly, it could still rank well if it has great, relevant content.”

But let’s face it, as competition for shrinking organic results intensifies, you’ll need all the SEO help you can get. When a company like Google (not so) gently nudges you to go mobile, maybe you should go mobile!

The new update will begin to take effect at the beginning of May. If your site is already compatible then no action is required. If you’re not sure, give us a call.

Marketing Insights: Hello, this is Insight.

Marketing Insights: A decade of tweets.