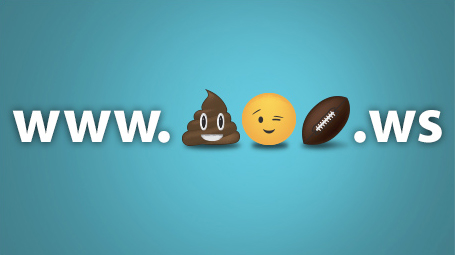 Insights:Emoji domain names or my URL is poop, smirk, football

Almost everyone knows and has used emojis. They’re those cute little pictures that people attach to messages to communicate an idea or feeling quickly. To be fair, they’re not all cute…though some people find even the poop emoji super charming.

Shigetaka Kurita invented the emoji in 1998 to allow users to send pictures from their phones that wouldn’t use too much data.

Since then, they have exploded in popularity and there are now literally thousands available that cover pretty much every emotion, message or thought.

Emojis are fast to use, add a little visual interest to messages and communicate a thought without to much concern for language barriers.

The big news is that you can now create domain names with emojis instead of letters.

That’s right, your new URL could be poop, heart, smiley.ws (Which I’m pretty sure is already taken.) Except for words it would be pictures.The .ws is the country-level domain of Western Samoa.

The reason .ws and a few other country domains are being used now is because ICANN (Internet Corporation for Assigned Names and Numbers) has yet to approve the usage and some countries, like Western Samoa, do not fall under that organization’s governing rules.

GoDaddy, the huge Web domain registration company, has built a search engine that allows you to find and register emoji-based domain names.

Some marketers, like Coca Cola, have already claimed emoji domains for advertising campaigns.

Of course, it’s early in the process of making emoji-based URLs universally user friendly, but they do offer some great advantages that will most likely ensure quick adoption by the masses.

Particularly since more and more Internet browsing activity is mobile based. And mobile has always been the emoji sweet spot.

It once again seems like everything old is new again. The adoption of images instead of words to convey messages harkens back to those communicative cavemen drawing pictures on their wall so everyone new what a great hunter they were.

Smile at you later. 😎

Are you selling your product category?