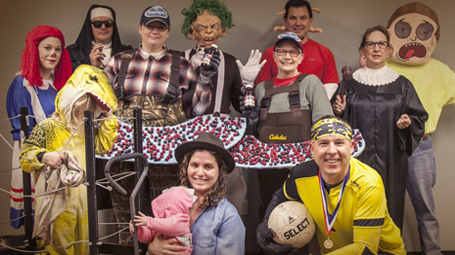 What do a U.S. Supreme Court Justice and a pregnant nun have in common? As it turns out, they both work at Insight Marketing Design.

This year’s Insight Marketing Design Halloween costume contest was once again a mishmash of crazy ideas and home-crafting skills with just a wee bit of potentially inappropriate decision making.

This year’s line-up consisted of a Golumpa, which was created by Ben’s obvious inability to decide between a Gollum or Oompalumpa costume. Ruth Bader Ginsburg showed up and ruled we were all out of order. Doug came as a Champion Soccer Player which was a page ripped out of the headlines because his son recently won a championship game. Gaye and Jill dressed as the commercial Ocean Spray guys and wouldn’t stop droning on about antioxidants and other important health benefits of cranberries. Roger went with the minimal but punny approach as Baby Face. On the cartoon front, Raggedy Ann and Morty drew some attention from the crowd. Rounding out the party, Kelcey came as Owen from Jurassic Park complete with tiny living dinosaurs. Oh and for those who haven’t figured it out yet, our resident Irish import came as what he called a “mickey-dodger,” aka a pregnant nun.

I’m sure you’re dying to know who took the win (and the cash) in the most creative and most changed categories. Before I reveal our 2018 winners, I just wanted to share with you a costume tactic that seems to always score the win. Kids! Kelcey with her two nieces as dinosaurs, won most creative and the “mickey-dodger” pregnant nun won “Most changed.” See, both costumes had kids in them.

Check out of all the fun and the ever popular before and after costume photos on our Insight Marketing Design Facebook page.

Read all about the power of community involvement