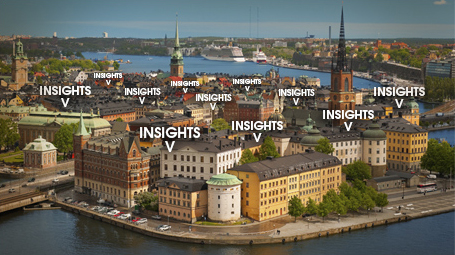 Insights:Marketing Insights: Hello, this is Insight.

When a company or organization runs a marketing message, typically their goal is for their audience to contact with them for more information.

The Swedish Tourist Association took this idea in a new direction. People calling for more information were connected to random people in Sweden, instead of a representative of the organization.

You simply dial 46-771-793-336 and your call could go to anyone (who signed up) in Sweden. You could be contacting a truck driver, a student or whomever.

This unique approach took something that has been included with almost every marketing message, the phone number, and made something huge out of it.

This marketing approach poses many questions:

What if people were rude?

What if people said inappropriate things?

What if people didn’t answer the call?

What if the person didn’t speak the same language?

What if this unique and somewhat risky idea garnered tons of news coverage AND made people think and talk about Sweden?

This last question is what made the campaign a success. It brought Sweden to the forefront of people’s minds and also made Sweden seem like a really nice place. After all, what other country would be confident enough to allow their citizens to represent them in a totally unscripted way?

The real lesson here is two-fold. The first is to look at every element of your marketing with fresh eyes. Putting a phone number or web address on an ad is so expected by both the creator and the audience that people don’t really think about it, until somebody does something dramatically different with it. So ask yourself, “what else in your marketing mediums is an untapped opportunity?”

The second take away is to be noticed. You need to be willing to take a calculated risk. Chances are some negative interactions have happened due to this random calling approach, but most people will have a positive impression about Sweden and the Swedish people.

So in the spirit of Sweden, if you’d like to talk to us about a digital or traditional marketing campaign that will get noticed call 605.275.0011 and say “calling for Insight” and we’ll randomly connect you to one of our employees. Could be an artist, programmer, media planner or virtually anyone.