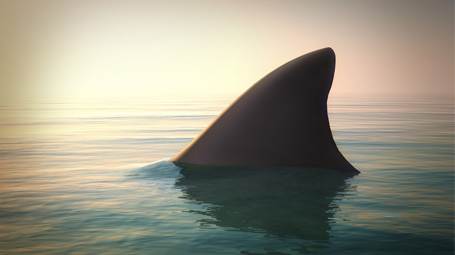 I was raised on a small coastal peninsula in Massachusetts called Cape Cod. Cape Cod
is primarily just a summer destination for over-heated New Englanders who aren’t lucky enough to live next to the ocean. It offers old-world charm and big beautiful beaches.

The people who live year round on Cape Cod make most of their money in the summer seasons from those coming to enjoy our beautiful beaches. When I was younger you never heard of the biggest terror of the seas swimming on our relaxing coast.

The Great White sharks returned with a vengeance in the last decade. Sightings and ghastly videos of them tearing into cute little seals suddenly seemed to appear out of nowhere.

They’re big. They have lots of sharp teeth. They swim in close to the shoreline and even up on the beaches. They get lots of news coverage that informs everyone in New England they will probably be devoured by one of these killing machines if they get even within a mile of a beach. This approach makes for gripping nightly news stories.

So what are these Cape Codders who make most of their income off tourist coming for the beach to do? Simple, they embraced the sharks. Not literally because that could be a very unfortunate decision, but instead of shuddering in fear they put these denizens of the deep on t-shirts, towels, coffee mugs and named drinks and even entire restaurants after them.

They took something that could have destroyed the tourist trade and focused on the majesty and wonder of these creatures. They encourage people to track our sharks online when they return home.

In other words, they did what every marketer should do, they saw the challenge and refocused the message and turned something negative into something that captured peoples attention in a positive way.

Even the worst changes in your business situations may provide opportunities if you consider the possibilities of embracing your shark. But if you do visit Old Cape Cod and the lifeguard tells you there has been a nearby shark sighting…. you should probably get out of the water as fast as possible.

Party in the park