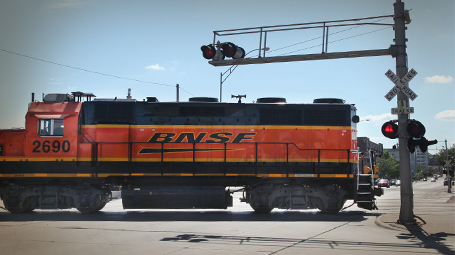 Insights:Marketing Insights: Getting pulled over by a cop in a train.

Sioux Falls, South Dakota, is the global headquarters of Insight Marketing Design. It is also home to a lot of train tracks. They literally run all through our fair city and can be quite annoying when you’re stopped waiting for a 100-car, rock-carrying train to pass by.

Most of the tracks through the city don’t have gates, just flashing red lights to indicate drivers should stop before getting smashed by a huge engine. Apparently, a lot of our usually law-abiding citizens run those flashing lights to beat the train and get on with their day. The railroad company doesn’t like this. The local police don’t like this, either.

This is the point where some out-of-the-box thinking took place.

Instead of just putting some cruisers near the tracks in hope of catching the light-runners, the police actually borrowed a train engine and drove it back and forth across a busy street and then called fellow officers with the plates of every car that ran the light. Forty four tickets and a few hours later they declared it a big success.

Whether you agree with this type of proactive enforcement or not, you have to admire the unexpected approach. They completely changed what their intended targets expected them to do. They changed the game and got results they never would have if they played it the same old way.

This is a good thing for marketers to keep in mind. When you do things in an expected manner, people don’t pay much attention. When you approach a problem in a totally different manner, the results can be astounding.

Next time you’re working on a marketing challenge, ask yourself “What could be my unmarked police train engine approach?”

The moral of this blog? Don’t run train stoplights and don’t settle for the expected.

Marketing Insights: The news about E-newsletters.