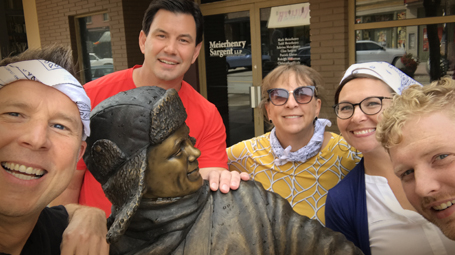 Every year, the crew at Insight Marketing Design takes a break in the summer to do what you’re supposed to do in summer, have fun! In the past we’ve been kayaking down the Big Sioux River, played golf, visited a winery for live music and even had a corn hole tournament. This year, Jill Smith our Vice President of Digital Services looked to her television for inspiration and we were off and running – literally.

Jill based a real-world experience on the television show called The Amazing Race, which is presently broadcasting its 31 st season. For those of you who’ve missed the first bazillion episodes of this show the idea is that contestants race each other to accomplish certain tasks and head back to the judges with proof. The team that accomplishes the task quickest is the winner.

Two teams of five were drawn. First we had to decipher clues that Jill had created then we raced around trying to find the items or perform the required actions. Fortunately, Sioux Falls is full of amazing art and funky boutiques so we had no problem finding a bear made of forks or roaring yeti-like next to a 10 foot yeti.

We received a lot of comments from innocent by-standards – for example, why are you people making your bodies into the shape of a “Z” in front of Zanbroz Variety
store? Or, are all five of you going to share that one lollipop? Since it was a race we didn’t have time to answer all these queries, so somewhere somebody is probably
saying: You won’t believe what I saw downtown today.

Once we had performed all the tasks, the rush was on for the finish line, which of course was Insight’s regular watering hole – Monks House of Ale Repute. After the
winner was announced the beer began to flow (it’s hot racing around town) accompanied by pizzas. Even though my team didn’t win – we felt the cold beer and
tasty pizza made us all winners in the end.

You can check out the photos and videos from Insight’s Amazing Race on our Facebook page. Here’s hoping you had a fun summer, from your friends at Insight
Marketing Design.

Training videos OR Everything you wanted to know about aseptic sampling.